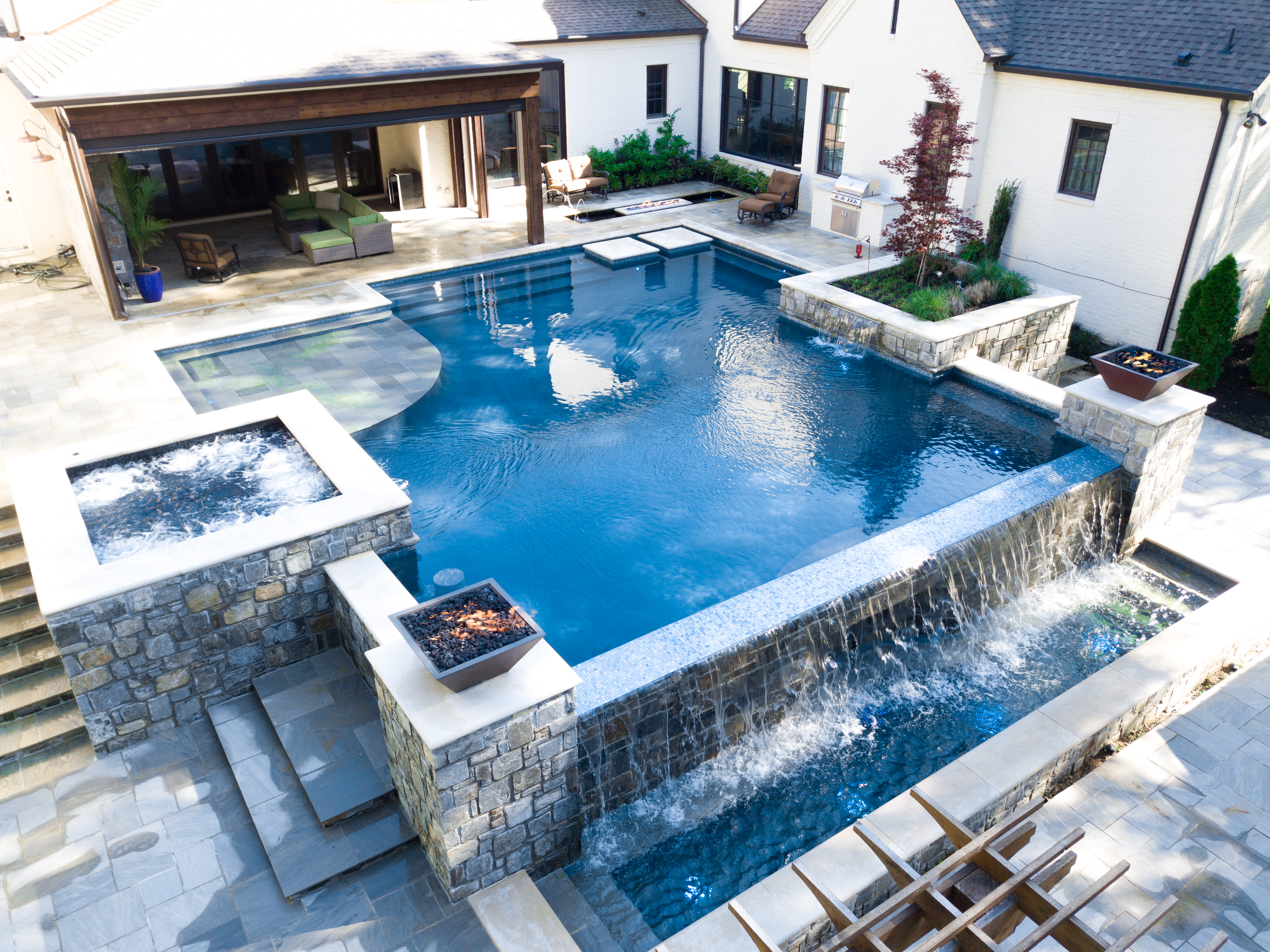 “As the house wraps all the way around the pool on three sides, there were a lot of different viewpoints that needed to be taken into account from a design aspect.” 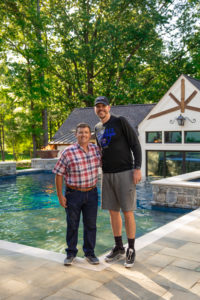 Collierville residents love a good patio. We’ve noticed an influx of patio spaces over the last few years, whether it be at restaurants or residential. It is becoming a standard practice for new restaurants to incorporate space for a patio, as we’ve seen in the new Lost Pizza Co., Collierville Commissary, and Salsarita’s to name a few. As reflected in the Fitzgerald Residence home tour in previous pages, large patio spaces have become the norm for new residential construction as well. However, there comes a time in the summer where sitting outside in the Collierville heat is just a bit too much, without having a pool nearby to cool down. With that in mind, we sought out to find one of the most spectacular pools in the Collierville area.

Brandon Malone, of Malone Construction Enterprise, LLC, helped point us in the right direction, having just completed a high-tech pool with almost every feature you can imagine. With a focus on quality over quantity, Brandon says they are able to pay more attention to the details that clients really desire. After having met with the Memphis Tigers Assistant Coach Mike Miller and his wife Jennifer, Brandon says it was apparent that they wanted a truly unique backyard environment, not just a pool. “Jennifer was adamant about having a koi pond that could be seen through the house and from the front door entrance. We later integrated a linear fire trough feature and four deck jets to make it a one-of-a-kind koi pond,” says Brandon. The koi pond adds another ‘sitting’ area to the backyard paradise, just off the covered patio. 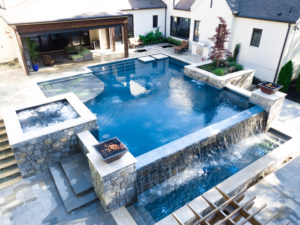 One important component of the pool to the Millers is that they wanted to bring the pool up as close to the covered porch as possible, so that those swimming in the pool could still socialize with those sitting underneath the covered area. “As the house wraps all the way around the pool on three sides, there were a lot of different viewpoints that needed to be taken into account from a design aspect,” says Brandon. From the vantage point of the covered porch, one can see nearly thirty feet of vanishing edge that makes it look as if the pool is flowing into the pool house. However, looking towards the pool from the pool house, you see a massive sheet of water cascading down the stone-veneered wall that is collected in a trough basin that also functions as a lounge area, complete with a hidden grotto (pg. 34)!

“Mike and Jennifer were some of the most amazing clients to work for as they were very open to letting us create a design that was outside-the-box for your typical pool. It allowed the backyard to reach its full potential, and become something that Malone Construction is truly proud to be part of.” 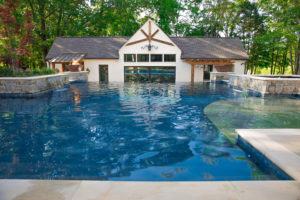 As a lot of effort went into the small details of the pool, Brandon says that he worked with the Millers to come up with a truly unique plaster color by mixing several different colors of Diamond Brite plaster mix to achieve their desired look. “The pool deck is a square-cut Bluestone and the veneer stone is called ‘dove grey’. The coping around the pool perimeter is an Indiana Limestone,” says Brandon. Adding to the details, Malone Construction incorporated multiple sheer descents, and two copper fire features. Malone and the Millers decided to have an elevated spa/jacuzzi, making it perfect for viewing the wildlife that comes out in the late evenings from the adjoining fields.

As mentioned, the Miller pool is high-tech. Consisting of over sixty thousand gallons, the pool has seven Jandy® pumps that operate the pool, koi pond, spa sheer descents, and the vanishing edge feature. Amazingly, it can all be controlled from a smartphone: “All the pool features and functions are controlled through Jandy’s iAquaLink™ system that allows you to control everything from your phone, wherever there is internet service,” says Brandon. That means even if the Millers are in another city, they can control their pool with a couple clicks on their phones.