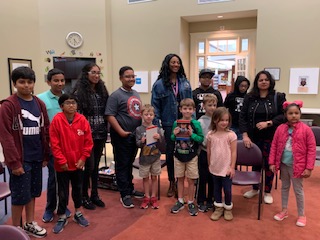 On October 14th, gold-medal Olympian Rochelle Stevens, a Memphis native, visited the Collierville Burch Library for the second time. During her last visit, she spoke to adults about her book, Travel The World By Foot. Her book focuses on her journey to becoming both a gold and silver Olympic medalist, and how she traveled around the world to compete.

This visit, however, was focused on younger kids! Stevens’ new book, Run Like Rochelle, was featured during storytime at the library. Her nephew, 11-year-old Matthew Truitt, is the co-author of the book, and he joined Stevens to read the book to the group of kids gathered at the library. 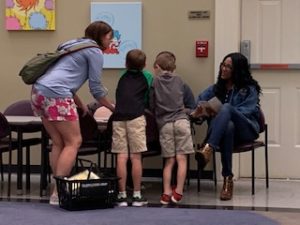 Truitt read the first half of the book, about how much Stevens enjoyed running as a little girl and how she wanted to become an Olympic runner. Stevens then took over reading, as the book transitioned into the details about how she was able to train and compete at the Olympic level with the help of her family. When she was done reading, Stevens asked the group about their dreams and answering their questions about the book.

Source | The Town of Collierville