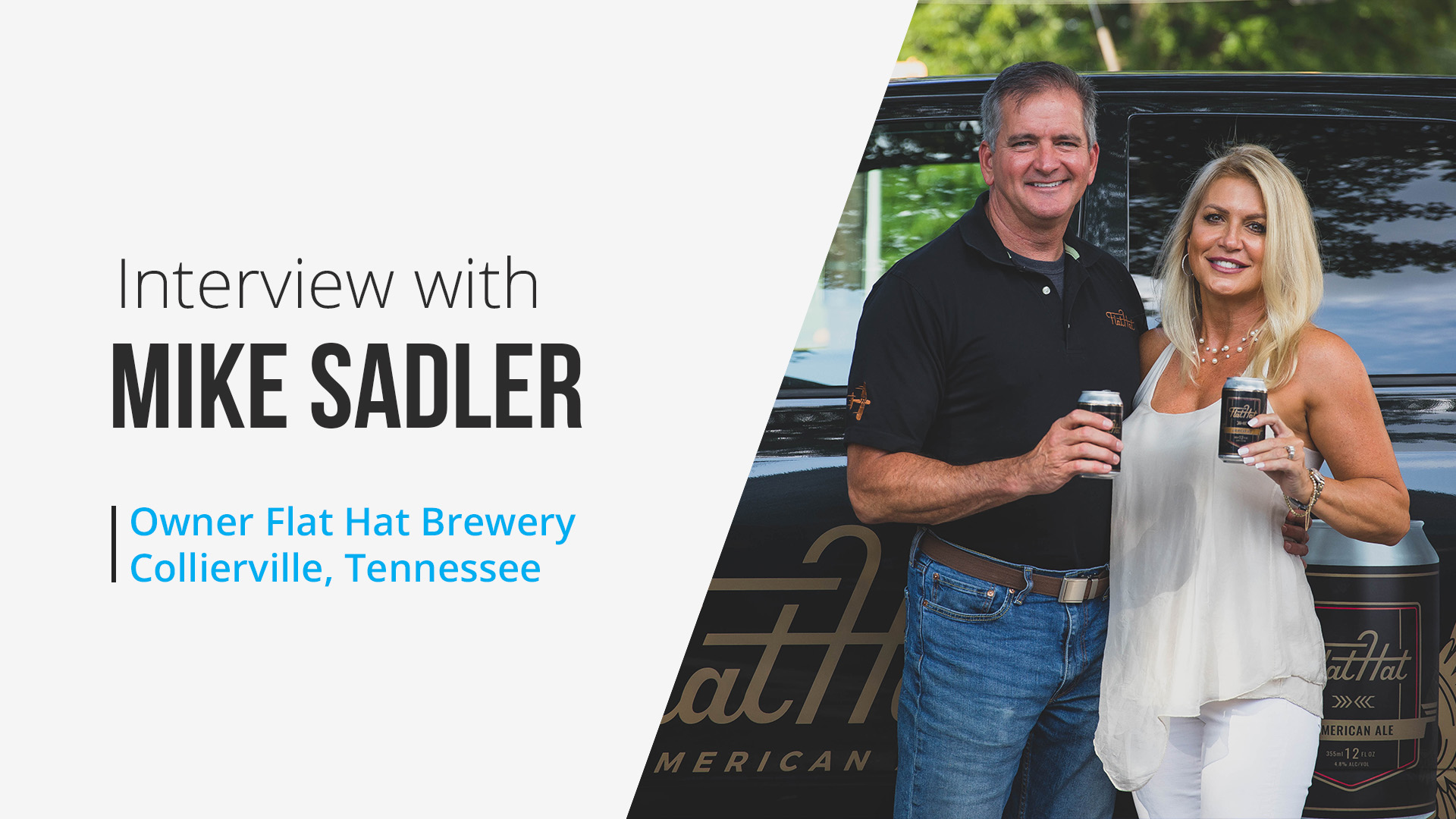 Keith: Hi, this is Keith with Tour Collierville, and I am here today for our Two-Minute Tuesday with Mike Saddler of Flat Hat Brewery. Mike, welcome.

Mike: Thanks, Keith. How are you?

K: Good, good. I think I’ll start with the question everyone wants to know: the name? Flat Hat, it’s kinda unique. How did that come about?

M: It is unique. It’s actually a term used in naval aviation. I was a pilot in the navy, and the legend is in the early days of naval flying, a pilot was flying really low down the road and hit a pedestrian on the head and crushed his top hat. So stunts and low flying like that became known as flat hatting. It eventually encompassed everything tower flybys and things like that, but it was, for pilots, testing yourself, pushing the limits, and seeing how good you were. That’s where our name came from. Our branding idea is that anybody doing anything, whatever sport or activity, whether it’s motorsports or golf or fishing or triathlons, if you’re pushing yourself and you’re testing yourself, you have that same kind of flat hat spirit.

K: So a little bit of adventure and kind of pushing it to the limits. Is that something that’s kind of unique in the beer? Does it kinda push the limits of beer? Does it have some bite to it?

M: Actually, the idea is that the beer is really a celebration of that lifestyle. We created the beer to be light, crisp, and refreshing, so it’s kind of a post-race or post-run or something you can take to the golf course or the pool or the beach so it’s really just a refreshing, crisp beer, but it does have a really good flavor.

K: So an active beer, not so much of a sit back, heavy lager, but more of an active type.

M: We try to market to active adventurous lifestyles with this beer.

K: It certainly looks cool. We are in collierville, and we understand you guys are coming to Collierville. Have you found a place, are you looking?

M: Well, We are negotiating on a place right now. It’s an older warehouse that’s actually close to the square, so we have to do some work with the city to make sure that we’re gonna be able to get in there with the utilities and all the codes and requirements are gonna be met. We’re working on that, hopefully we’ll have some decision on that in the next couple of weeks actually.

M: Cindy and I, the cofounder and I, moved here about 12 years ago. I work for Fedex, I’m a pilot for Fedex, that’s what brought us to collierville. We just like the town, it’s a great place. It’s a great place to raise kids if you have kids. Or just kind of a quiet, ““out of Memphis”” kind of lifestyle. We enjoy it, and we think that Collierville will be a great opportunity for the brewery. We think it’s something the town will really enjoy.

K: So you live here, in Collierville?

M: Well, I hope not. Our model is gonna be a little bit different than some of the ones that are in Memphis where it’s just a brewery with some food trucks and they just focus mainly on the beer. We’re gonna more of a brew-pub style where there will be a full service restaurant and we really do wanna make it family friendly. There’ll be some games and things like that to entertain the kids and adults as well. It’ll be more of a restaurant.

K: If there was one thing that you wanted Collierville to know or wanted to know about flat hat or you guys, what would it be?

M: Well, there’s a couple things. Flat hat is our beer. It’s gonna be our flagship brand and we hope to make it regional then national. The brewery itself is gonna be called Hook Point Brewing which is also a naval aviation term. We’ll have more styles and other types of beer once we get the brewery open and running.

M: Absolutely, there’s more planned, more marketing planned, more beer planned, more fun planned. I think it’s just gonna be a good time. Everybody that we’ve spoken with in the city, including the majority of the people with the City of Collierville are excited about it and looking forward to it.

K: We’re certainly looking forward to it from being in collierville but also being on the square.
I did notice, I wanted to ask, there’s something that says “brewed in Atlanta.” Will that ever say brewed in Collierville?

M: Eventually, yes. We’re doing what is called contract brewing so we have a brewer in atlanta that brews the beer for us, and they actually helped with the, we had a basic recipe, and they kinda tweaked our recipe to get it where we wanted it, but they brew the beer for now. They’re potentially gonna be partners with us, and will continue to work with us on future beers, but we’ll have our own brewer and head brewer here in Collierville. Eventually

K: Eventually we’ll see a beer that says Brewed in Collierville, that’s what I wanna see

K: Outside of this, of course, What kind of beer do you drink personally?

M: That’s what I drink most of the time now, it really is a good beer. I like dark stouts. I like porters. So we’re definitely gonna work on some of those,

M: I really would like to see us have a range of five or six standard beers, and then we’ll do some experimentals and do things that are a little off, one-offs yaknow, we’ll do one batch and see how that goes, see how people like it. We’re open to options too. We’re certainly gonna let people come in and give us their ideas.

K: So you’re gonna be open for feedback and some community stuff?

K: So if you guys, what do you think, were able to find the right place, how soon could we be looking at? Maybe a year, six months? How long do you think

M: I think six months for the brewing part of it. That’s our place. We’re gonna do it in phases. We’re gonna open the brewery and have a small retail space that we can do off premise sales initially while we nail down the restaurant part of it. So this time next year, hopefully we’ll have the full brewery and brew-pub and tap room open and running.