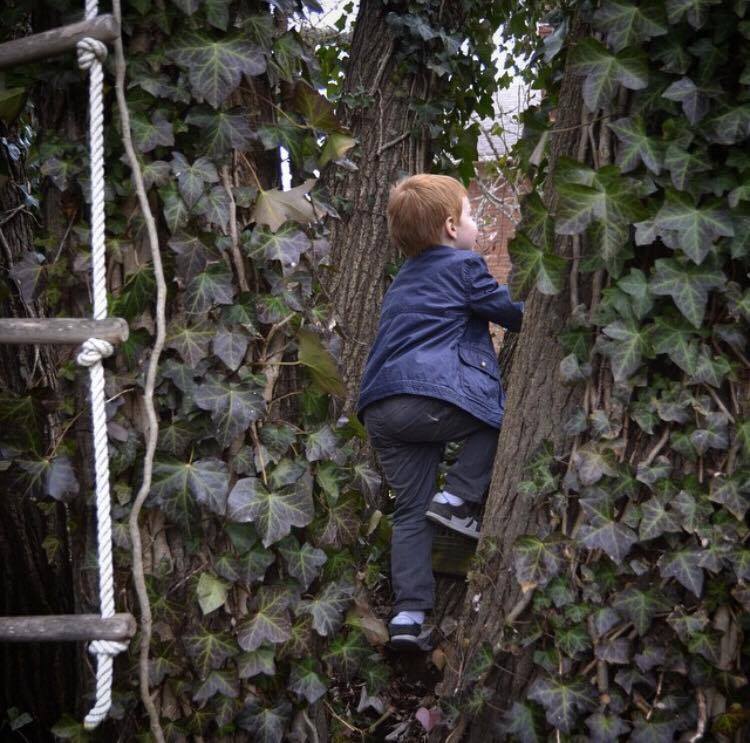 Having your own treehouse allows your imagination, no matter at what age, to run wild. You’re hanging out literally above the world with the bugs and birds, maybe a few friends and a pile of books to keep you company. Pictures of these nostalgic places are like keyholes into this special place where only kids are allowed! Whether the treehouse is a big boxy structure between two trees or covered in vines settled in an earthy-trench, they are places of adventure and imagination that can last a lifetime.

“ This was a staple for our backyard – everybody knew us for our tree house and tire swing.” 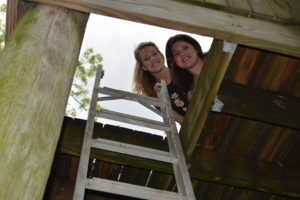 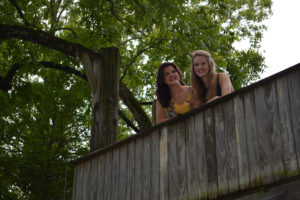 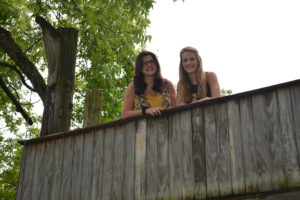 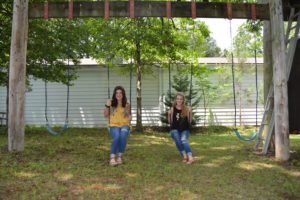 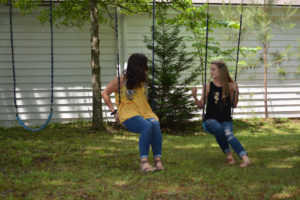 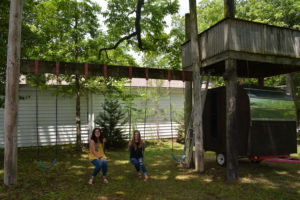 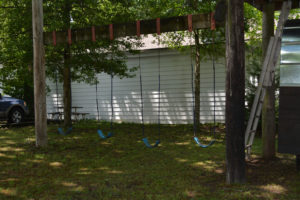 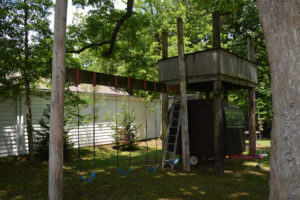 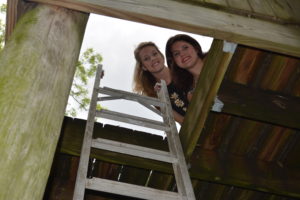 Who built the treehouse?

Our Dad with the help of some of our cousins. It was a family effort. My dad had been collecting the telephone poles for a few years with this in mind. It was built built in early 2000s -probably 15 or more years ago.

Why did your Dad build the treehouse?

He (dad) had four little kids with a huge backyard and we always wanted a treehouse. It was the perfect place that he customized to us – we called it our ‘tree fort’. We had great times up there. Played with our baby dolls and had tea parties and played restuarant. We used the pulley to pull things up to us. And there was a swing for each of us.

What does the treehouse mean to you?

He (dad) built everything for us. I mean anything from our childhood that had any significance at all, dad had built. This was a staple for our backyard – everybody knew us for our tree house and tire swing.

Memories that stand out?

My fondest memories would be of us playing restaurant where either the girls or boys would stay upstairs and the others would go to the kitchen and make sandwiches. Then we’d pull everything up in the pulley and serve them. Then we’d swap. We had a lot of fun times back here.

“We have a small treehouse that’s located in a giant privet in our backyard that my husband built out of recycled lumber a couple of years ago. My son and youngest daughter love The Magic Treehouse book series, and they wanted a treehouse so that they could pretend to journey to and explore other times in history just like the book’s characters, Jack and Annie.” 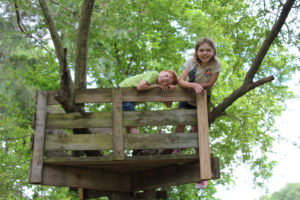 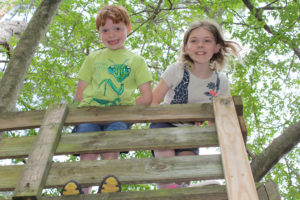 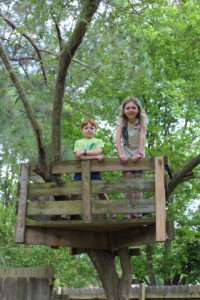 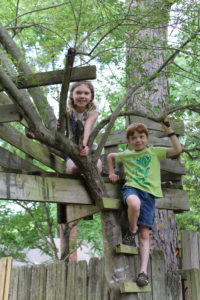 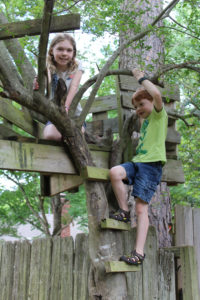 Can you describe your treehouse?

Who built your treehouse?

What is your favorite thing to do in your treehouse?

What makes your treehouse so special?

If you could invite anyone over to play with in your treehouse, who would it be? 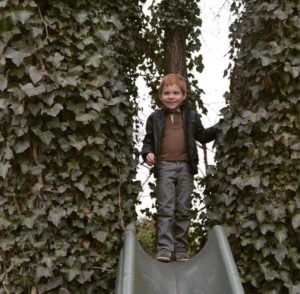 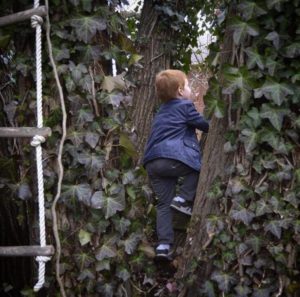 Our treehouse has been so special to our family. We moved to Collierville about two and a half years ago and our son was really sad about leaving our old place. The treehouse was built by the previous owners and I can say for certain that it was instrumental in making the transition to our new home a little easier for our kids. They had never had a treehouse before, and knowing it would be all theirs when we moved in got them excited.

Like most kids, ours are obsessed with video games and try to bribe their way to more “screen time” every day! We always encourage them to spend more time outside, enjoying our 5 acres, and they usually always end up in the treehouse. It’s not just a fun place to be, it helps them use their imagination and work through problems together. Our daughter is a little too young to climb up by herself so our son becomes a helper and suddenly they aren’t fighting over a toy, they are working together. A big plus for them, I think, is the fact that neither my husband nor I can get up there which gives them a sense of personal ownership of something and privacy.

The feeling of pride and “ownership” is visible in how they like to keep the slide cleaner than they keep their bedrooms. They could spend hours tossing the Sugar Gum Balls out of it, while inside – it takes them hours to pick up one toy.

During the recent storms, two of the massive trees that make up the walls of their tree house fell down. We were devastated of course, but now we’re cheering ourselves up by making sketches and “blueprints” for how we’re going to rebuild. It’s math, engineering, art, creativity and a little bit of silliness, and that’s what we all need right now to get through the sadness of losing our precious tree house. 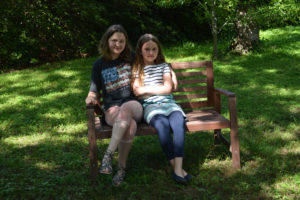 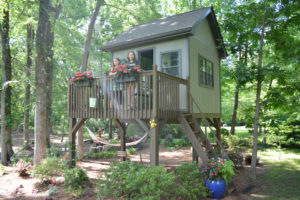 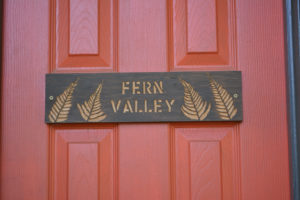 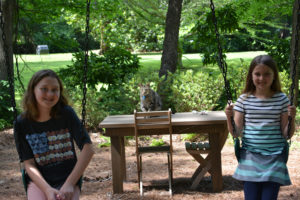 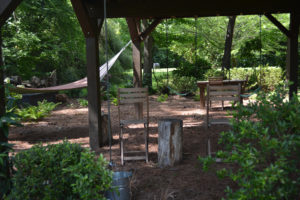 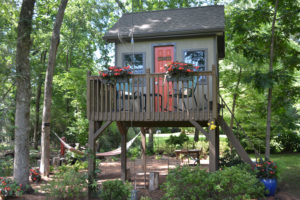 Had for about 2-3 years. Would love to play restaurant and would pick oversized veggies from their mother’s garden. Contracted out to build the tree house but family effort to clear the spot for the the treehouse. Grandfather carved the sign and built table and bench for kids to play and enjoy. Good reading nook on bench.

For Christmas dad told the girls they would get one – the original play house the girls had, they outgrew and wanted something bigger for friends to come over and enjoy with them.

“We really liked the movie ‘Fern Gully’ growing up and because it (treehouse) is back in the woods, we named it Fern Valley. Our grandfather made the sign for us. He engraved it so it makes it special.”

Have a pulley system to bring them from the bottom to the top of the treehouse. “Our dad likes to put in cool stuff we weren’t expecting.”

Passcode on the door with secret code. “Our neighbor is a few years younger than us and would like to come over and be a little nosey, so we put up a lock for just us…. it’s fun only us knowing the secret code!”

“We made the three birdhouses: one for me (Sophie), one for Maya and one for mama. It was a mother-daughter thing. We like to put our favorite things in here (treehouse).” Picture of rescue animal aunt sent them, picture of volleyball team few years ago, and picture Sophie drew a few years ago on peg board,

Favorite things to do up here: “I do my homework up here a lot. Maya and I like to write short stories and we do a lot of creative thinking up here too. This is a really good spot to sit and think. There isn’t a lot of noise in here.”

Decoration: “We used the chandelier and drapes to cover the top because we couldn’t get up there to paint. We used Peacock feathers that came from our aunt’s farm. And the the bear, flower cart, music box and little fairies came from our great-grandmother – she gave us a lot of old stuff to use. My quill and ink set is up there, oh and my ladybug with my baby teeth are up there too! And a bunch sea shells we picked up at the beach in Florida.”

Pieces of wood: Sophie had a quill and ink set so they would use extra wood pieces and wrote on them with their names.

Rocking chairs to sit out front.

Favorite memory: “One time where is was raining really hard outside and we were trapped in the club house. And our cat was in there with us. He hates the rain! So when we finally decided to make a run for it, Luke stayed behind and wouldn’t run with us. I (Sophie) had to run back and get Luke to bring him inside.”

“We had a Halloween party one year and had like 13 or 14 friends over at one time in the club house. It was packed! We had so much fun. People were underneath too having fun.”