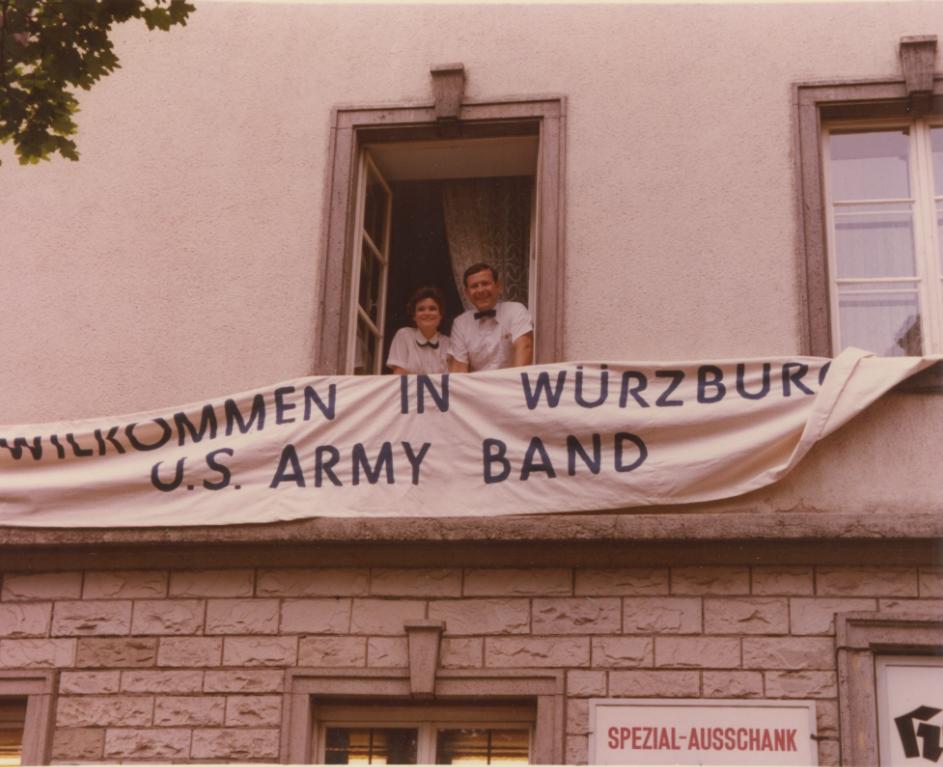 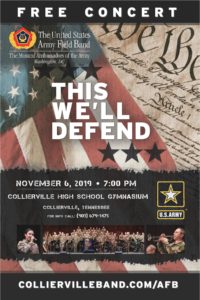 Since 1946, The U.S. Army Field Band have been known as the “Musical Ambassadors of the Army” and are located in Washington D.C. The band consists of four components: the Concert Band, the Soldiers’ Chorus, the Jazz Ambassadors and the Six String Soldiers.

Collierville residents Bill and Jeannie Jones, both now retired Sergeant Majors, were members of the U.S. Army Field Band and Soldiers’ Chorus respectively for twenty years. During their senior year of college, each of them went through a stringent audition process, joining the band after completing their musical education degrees. 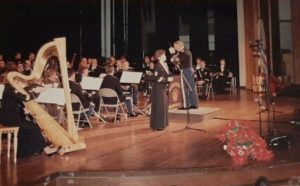 Jeannie was among the first women to join the Soldiers’ Chorus, which had previously been all-men, and Bill played the french horn. During their time in the band, the Joneses’ rose in both rank and responsibility, with both earning positions as featured soloists.

Before retiring, Jeannie was the soprano section leader and the rehearsal conductor of the Soldiers’ Chorus, while Bill was the principal french hornist and the assistant conductor of the U.S. Army Field Band.

Both Bill and Jeannie speak highly and excitedly of their time with the U.S. Army Field Band and Soldiers’ Chorus, calling it an “amazing and fabulous” job. They travelled extensively, up to 150 days a year, playing concerts in all types of venues from New York City’s Lincoln Center to high school gymnasiums in Alaska. One of their favorite events was at the 1986 Statue of Liberty Centennial, where they performed alongside John Williams, Whitney Houston, Barry Manilow and Johnny Cash.

They also travelled internationally, and met celebrities, statesmen and citizens along the way. One one occasion, Jeannie met Tom Selleck at Bob Hope’s 90th Birthday Celebration, and then presented Hope with a unique Army Field Band crest for his collection. Meanwhile, during the band’s trip to India in the 1980s, Bill spoke with Prime Minister Rajiv Ghandi. “You get to see how everyone lives,” Jeannie said about the opportunity to travel. “You learn the age of the world.” 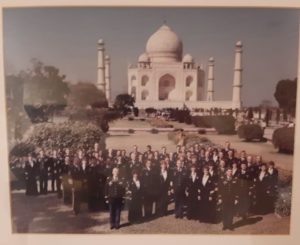 Both commented that one of their more emotional performances was in France during the 40th Anniversary of D-Day. Bill performed in Normandy with the band, which marched across the cliffs and into the cemetery. While there, he ate MRE’s and slept on a cot in the gymnasium. “It was a very sobering, unbelievable experience,” said Bill.

At the same time, Jeannie performed in Paris at commemorative events, where she was thanked, as a U.S. soldier, by a Frenchwoman for freeing France. As one of Jeannie’s first concerts outside the United States, this interaction completely changed her perspective of the job. “This woman said, ‘My aunt wants to thank an American soldier for freeing her country’, and I was so humbled and emotional. And I said back to her, ‘On behalf of the United States, I accept thanks and flowers but this was my father’s war, and he fought in it, and I will accept it for him’,” Jeannie said.

However, they also saw the occasional negative side of being the diplomatic face of the U.S. Army. When Bill first joined the band, it was at the height of the Vietnam protests. “I remember the taunts, the protests and the spitting, I remember that,” Bill said about entering concert venues at the time. 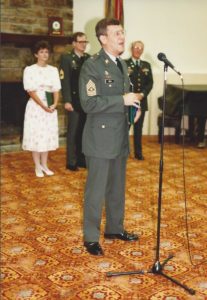 In 1996, Jeannie took a position with Opera Memphis and Collierville’s relationship with the U.S. Army Field Band began. In 1997, the band came to town for the first time and played in the former Collierville High School’s gymnasium. More recently, in 2017, the Jazz Ambassadors performed at Sanctuary on the Square, where Jeannie is currently the Producer of Chamber Music Series.

Overall, the Joneses’ describe the time with the U.S. Army Field Band and Soldiers’ Chorus as “incredibly humbling, because we represented U.S. soldiers deployed all over the world,” said Jeannie.

“It didn’t make any difference where we were, it was terrific to be with fellow citizens,” added Bill. “We’re really one of the only venues that the Army has to become personal with Americans.”

This is certainly one show you don’t want to miss! To get your tickets to the U.S. Army Field Band, visit colliervilleband.com/afb or call 901-679-1475.