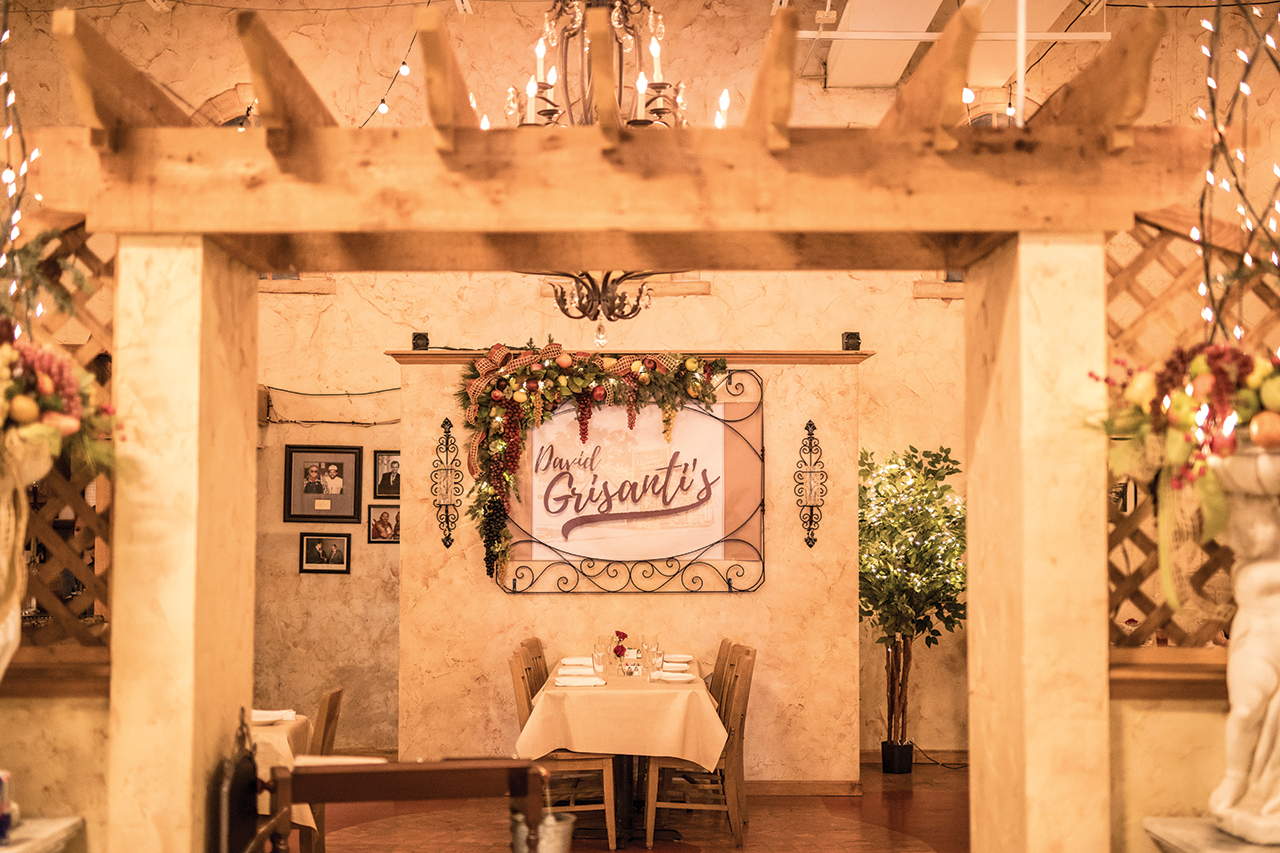 I would bet that if you’ve ever lived in the greater Memphis area, you’ve been served a meal by a Grisanti. Whether at Rinaldo Grisanti’s first restaurant in 1909, The Original Grisanti’s sixty years later, Frank Grisanti’s at The Embassy Suites, Ronnie Grisanti’s, and more, we’ve all shared in this family’s wonderful Italian food.

The Grisanti’s family of restaurants have been a staple of the greater Memphis area for more than one hundred years, and now, Collierville has a new Grisanti’s restaurant of its own: David Grisanti’s Italian Restaurant.

Rinaldo Grisanti immigrated to Memphis from Italy in 1909. Rinaldo’s two sons, Elfo and John, would take after their father, owning and operating their own Grisanti’s restaurants. Known as “Big John”, John Grisanti was the owner and head chef of The Original Grisanti’s Restaurant at Airways Boulevard and Lamar Avenue. He opened his famous restaurant in 1962, after working for his father’s restaurant, Willie’s Grill, in the ‘50’s. Characterized by his big personality and exquisite expertise for Italian cuisine, “Big John” would go on to become a Memphis legend, and his restaurant, The Original Grisanti’s, is now considered a historic establishment by many.

Alongside the many guests who were fortunate enough to have the opportunity to visit “Big John” at The Original Grisanti’s, was a young man folding silverware, washing dishes, and assisting in the kitchen. “Big John” would show him how to properly cook and prepare their family’s famous lasagne, ravioli, and other traditional Italian dishes.

At the age of fifteen, this young man is “Big John’s” son, David Grisanti. It was at his father’s restaurant that his love for La Cucina Toscana would begin to grow, under the glowing example of his father and best friend.

In recent years, David had been assisting his cousins, Ronnie and Judd Grisanti, at Ronnie Grisanti’s Collierville location. It was during this time that he became familiar with Collierville and Shefield Antiques Mall. When Judd decided to relocate Ronnie Grisanti’s to East Memphis, David was presented with the opportunity of a lifetime, the chance to honor his father’s legacy with a restaurant of his own. David has been looking forward to this moment since working with his father at The Original Grisanti’s.

I recently had the opportunity to meet with David to ask him about his family’s business and his new restaurant.

He first thanked Sheffield Antiques Mall, the 78,000 square foot space that hosts David’s restaurant. David began, “Well, first of all, I love the antique mall. They were very supportive of me. They want me to be here. When I told them that I wanted to stay here, they were overwhelmed.”

David was very emotional during our meeting. Hearing him talk about the realization of his dream of opening this restaurant was heartwarming. He expressed tender feelings for his family, both past and present. With tears in his eyes, David explained, “They’re very supportive of me. My family is so supportive, especially my wife. I’ve struggled all my life to open a restaurant and it finally happened.”

David’s menu also takes inspiration from his father’s restaurant, reintroducing his guests to famous Grisanti dishes like his father’s spinach lasagne and ever- popular ravioli.

In just three short months of being open, David has had guests send him emails praising his food, writing that it reminds them of the food they were served by his father. I could tell that David was proud of his customers writing to him, as he quickly hurried out of our booth to print copies of several emails he had received. One guest wrote, “David, the food and entire experience was fabulous! Your family must be very proud. I know your grandfather would have been!” The guest continued, “I was most impressed with the handmade ravioli. It was so much like old ‘Big John’s,’ who prepared our wedding rehearsal meal.”

David even dresses his tables with red roses as another callback to his father’s restaurant: “The reason I have roses on the tables is because my dad had a garden at his restaurant. All of the servers would go outside and clip them, and we’d put them on the tables.”

When asked about Collierville and how he feels about opening his first restaurant here, David replied, “I just have to believe that God put me here for a reason. There’s a reason I’m here, at this place.”

You can imagine what David is feeling in this moment. For years, he has held dear the memories of a young man watching his father cook and prepare food in the heat of their kitchen. He’s reminded of his father welcoming and greeting regular guests and new faces alike, while the familiar sounds of forks, knives, and plates ricocheted against one another. Now, these sights and sounds are his own, from his kitchen, to his customers’ smiling faces and friendly employees.

David has worked tremendously hard to make this dream a reality for his family. His wife, Robyn, assists in the management of the restaurant, while his son, daughter, and step-sons also work and help where needed. As he experiences the restaurant business alongside his family and friends, David sees himself in his children and is reminded of his days rolling silverware and cooking at his father’s restaurant.

Finally, I asked David, now owner and head chef of his own restaurant, what he’s learned as a Grisanti working in this business for as long as he has. After taking a moment, he proudly gazed upon the sign that hangs at the front of his restaurant – David Grisanti’s – and said, “Never give up.”