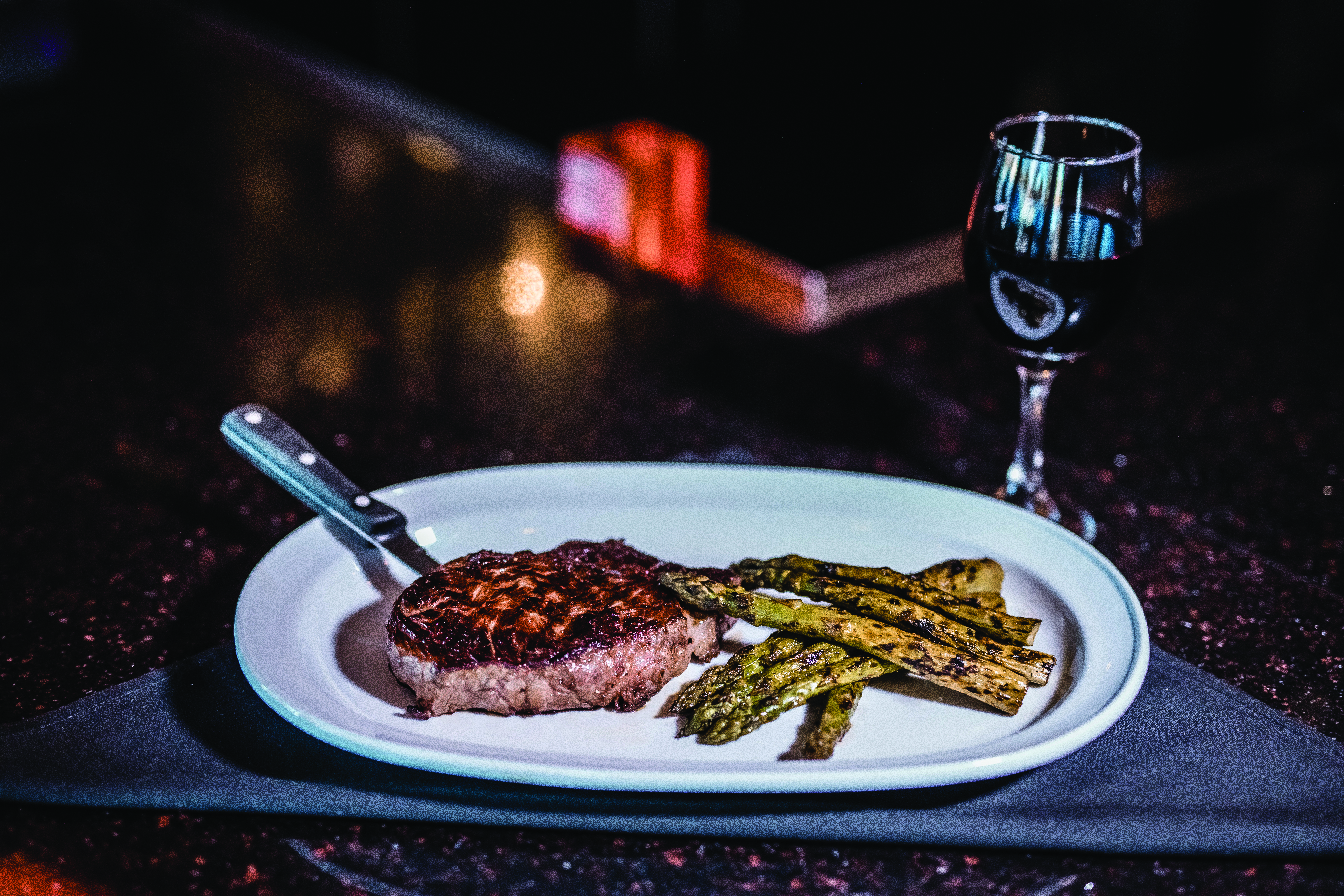 Jim’s Place Grille is the place to be in Collierville. As one of the first “upscale casual” restaurants to open its doors here, Jim’s Place Grille has grown with and become an important part of Collierville’s community. However, Jim’s Place has a long history in the greater Memphis area, serving food to its locals since 1921. Now, nearly a hundred years later, Dimitri “Mimi” Taras and his sons, James and Sam, continue to share their family’s love of preparing and serving great food with Collierville.

The story of Jim’s Place begins in the basement of the William Len Hotel in 1921. Two immigrant shoe shiners from Greece, Jim Katsoudas and Dimitri’s uncle, Nick Taras, opened their restaurant in the downtown district of Memphis to much success. They established their brand at this location, at the corner of Main and Monroe, serving a wide array of meats and other Grecian-inspired dishes. With an offering including steak, pork, lamb, and calf’s liver (an old favorite), it was there that Jim’s Place became known for their library of delicious meats and their famous Grecian style and flavor.

I had the chance to sit down with Dimitri and his son, James, before a Wednesday lunch rush to discuss their family’s legacy in Memphis, and more recently, Collierville.

Dimitri Taras first became involved in his family’s business in 1967. It was then that Dimitri, alongside his father and brother, Bill and Costa Taras, opened the restaurant’s second location on Second Street. Ten years later, Jim’s Place moved to its most iconic location on Shelby Oaks Drive. Referred to as “The Farm” by their family, Jim’s Place thrived there, serving the Memphis community for thirty-four years, before relocating to Perkins Extended in 2010 and ultimately closing in 2017.

However, in 2006, Dimitri and his sons introduced their family’s restaurantto the little town east of Memphis.

James explained, “It was a big step to come to Collierville. We started looking in 2005 at this development, did some urban economic studies, and recognized Collierville as a big area of growth potential, so we opened Jim’s Place Grille in 2006.” Dimitri added, “Our name and our brand helped carry us in the beginning. Fortunately, we had a good name, and I think we continue to have a good name… I’m being immodest, but I think we do.”

Collierville welcomed the opening of the new Jim’s Place establishment in 2006. As previously stated, Jim’s Place Grille planted its stake here as one of the first “upscale casual” restaurants that Collierville could call its own. The menu of signature meats and fresh fish was, and continues to be, a delicious choice for Collierville’s families and friends. From their famous, one-of-a-kind pork tenderloin “Souflima,” first cooked byDimitri’s father in 1967, to more-recently popular dishes like their grilled salmon and, my personal favorite, their Grecian Lamb Burger, Jim’s Place Grille has found balance between the old and the new – the classic and the contemporary.

Not only does Jim’s Place Grille offer an excellent menu, it is also host to a lively bar scene on weeknights and weekends. Here, guests are invited to eat, drink, and order food to go at their leisure. Dimitri, James, and Sam are proud of their bar and particularly enjoy catching up with their regular customers and greeting new faces who line its barstools each night.

From the kitchen and its grille to the high-spirited bar scene and its crowds, it’s evident that the Taras family has found something special in Collierville. Dimitri, James, and Sam have embraced their family’s legacy through their commitment to the quality and consistency of their food and customer service.

Dimitri and James expressed the importance of having a physical presence at their restaurant. Dimitri said, “The first thing my father taught me, when we got into the restaurant business, is that you need to be here. Someone needs to be here at the physical location all the time.” Dimitri and James further supported this notion, sharing with us stories of their staff’s late-night heroics in the face of inclement weather.

James recalled the night that they served a full house with no power after lightning struck nearby. “Those can be dramatic times,” James said. “Not knowing when power would be restored, our team rallied together to take care of our customers, basically in the dark. We certainly earned our stripes that evening.”

Dimitri then thought back to a night when most restaurants were forced to close with one of Collierville’s rare winter snowstorms on the horizon. “We had a big snow one year,” Dimitri said. “For some odd reason, we said ‘Let’s stay open,’ and everybody else closed, and then we got blasted. It was like a Friday night, when it was actually a Tuesday night.”

These stories serve as testaments to the dedication that this family has displayed during their time in Collierville. When asked what makes Jim’s Place special, James and Dimitri stated that their commitment to their customers is what sets them apart. “It’s consistency. It’s commitment. We’re dependable to people,” James said. Dimitri noted, “We try our best to be as consistent as we can, and I think we are. That’s what we shoot for.”

Dimitri and James also spoke of the love that they have for this restaurant. They both agreed that these last twelve years at Jim’s Place Grille have been some of their most memorable since becoming involved in their family’s business. Dimitri stated, “The last twelve years of work, since I started with James and Sam, have been the most enjoyable years in my fifty-one.” James added, “This particular spot with this combination of ownership has been, I think, the most rewarding of the Jim’s Place history.”

Dimitri’s wife, Mary Katherine, stopped by during our interview and, once she realized what we were discussing, insisted that I ask her husband about the number of steaks he’s cut since 1967. Once she left, Dimitri responded, “It was funny. We were talking about that one day, and I said, ‘I don’t know… I know it’s at least a half million.’ I was just guessing. It’s probably more than that,but anyway, that’s no big deal.”

In summary, their family’s been cutting steaks and chops for nearly one hundred years, but from their perspective, not much has changed. This is business as usual for the Taras family – no big deal.